In April 2011, the United States Special Forces descended on Osama bin Laden, leader of the terrorist group al-Qaida’s, hideout. The ensuing raid killed bin Laden after over a decade of living in hiding and directing attacks through his followers. So who knew where he was located?

The answer may surprise you:

According to Kalev Leetaru, a researcher at the University of Illinois at Urbana-Champaign, an analysis of public news articles about bin Laden pinpointed his location within 200 kilometers in diameter. In a very real sense, one of the world’s most secretive hiding places may have ultimately revealed itself from the mosaic of individual data points. Each journalist had an opinion about the location, and all opinions together formed a true answer. The catch here: no survey was conducted, and no journalist was actually asked where they thought Osama was hiding. They revealed their opinions on bin Laden’s whereabouts through their articles. This is the power of public and unstructured data. 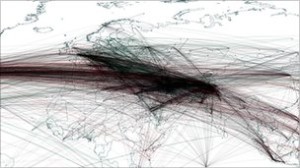 Most likely, the US forces did not rely on crowdsourced wisdom like this. We know today that US governement agencies like the NSA are tapping into all kinds of different data sources, from spying on the phones of top-level politicians to tapping into everyone’s communications through email providers. However, the principle is the same: actionable intelligence was derived from the aggregation of individual, and in this case, seemingly random, data points.

Herein lies the promise of what we call big data. It has become one of the trendiest digital buzzwords of the new millenium. It involves gathering business intelligence from the heretofore forbidden territory of data sets that are too large to curate or maintain as databases, often encompassing terabytes or even petabytes of information.

The text is part of the INTRO chapter from Ask – Measure – Learn.